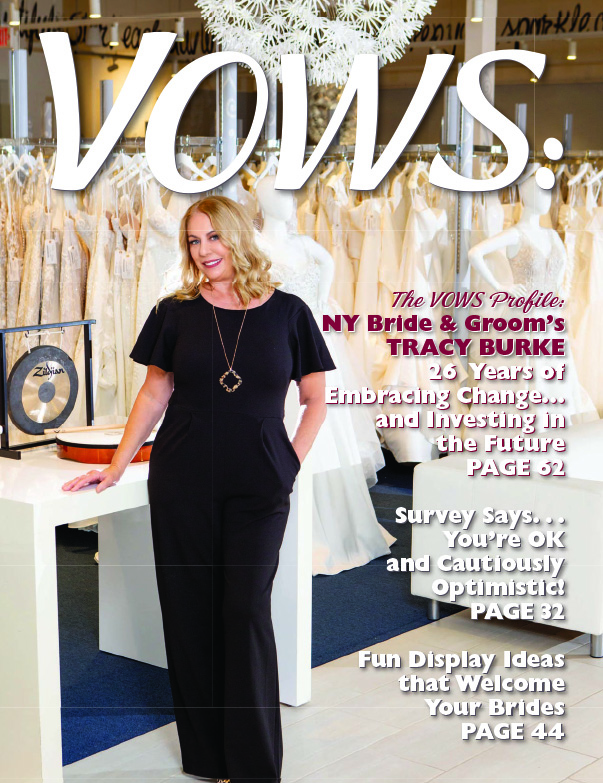 While some resist change, Tracy Burke has embraced it, much to the benefit of her 26- year-old bridal retail business.

Since launching New York Bride & Groom outside of Syracuse, N.Y., in 1994, Tracy has expanded her original location, moved 750 miles away to Charlotte, opened a second bridal store in North Carolina’s most populous city, shifted business models from a walk-in boutique for the masses to an appointment-only couture shop, moved locations, reshaped inventory, ditched appointments in favor of walk-in traffic, sold the original New York Bride & Groom store, incorporated a new generation of leaders and celebrated store openings while consistently hunting for opportunities.

Whew!  “Yeah, we’ve reinvented ourselves a few times over the years, but that’s been the key to our success,” Tracy says. “We’re not afraid to take risks or to change, evolve and grow to discover what works.” 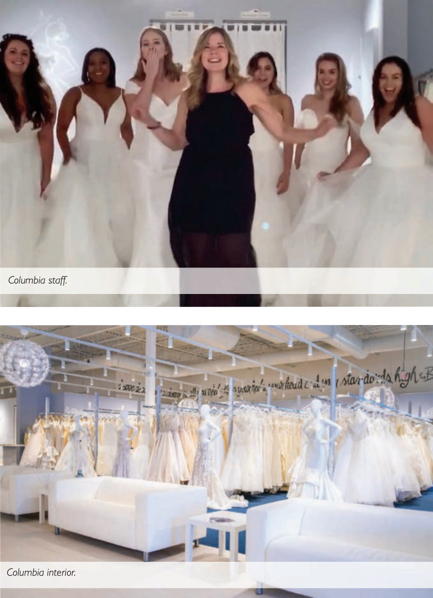 An entrepreneurial soul who directed her own event-planning firm, Tracy entered the bridal retail world in 1993 when she began managing a boutique in central New York. While Tracy led immediate gains at that retail operation, it was not, in her words, “a particularly great experience.”

Recently married herself, Tracy stood convinced she could blend her promotions and marketing experience with her growing understanding of bridal retail to create a winning concept.

“Rather than doing the work to make someone else successful, why not do it myself?” she recalls of her enterprising vision.

In 1994, Tracy took over a 2,500-square-foot storefront in Cicero, N.Y., a cozy suburb just north of Syracuse. Her goal was simple: to become the most welcoming and convenient bridal shop around. To achieve that vision, Tracy pumped her store with quality inventory and, in a shift from convention, ditched appointments in favor of walk-in business.

“It was a big, giant risk to do what we did, but I knew we’d be successful before we even opened the doors because I had already been doing it for someone else and saw ways to do it better,” she says. “Plus, failure wasn’t an option.”

True to Tracy’s belief, New York Bride & Groom found success – and in rather quick time. In year one, she expanded her store into a vacant space to the right. In year two, she consumed a commercial space to the left. In time, she expanded further, moving her thriving boutique into a newly renovated 10,000-square-foot storefront in Syracuse.

Into the Millennium, New York Bride & Groom rolled along, drawing brides and customers from all over New York state. Then, the September 11 terrorist attacks happened, a jarring tragedy that spurred Tracy and her husband, Tom, to reflect on the trajectory of their lives and what they wanted for themselves and their three children. During an exploratory trip to Charlotte, Tracy found she didn’t want to leave, drawn to the area’s warm weather and pro-business climate.

In 2002, the family moved to Charlotte and opened a bridal boutique in the city’s emerging SouthPark neighborhood. Though Tracy had hoped to replicate her Syracuse store in Charlotte, exorbitant commercial real estate costs dashed those plans. So, she pivoted. With a smaller space, she installed appointments and went the couture route, pulling in gowns from then-upstart designers like Monique Lhuillier and Lazaro Perez. In Charlotte, business hummed, even as Tracy continued operating the Syracuse store.

“I can’t even tell you how many miles I have on Interstate 81,” she says, adding that she would make the nearly 24-hour roundtrip trek between Charlotte and Syracuse 2-3 times each month.

Though Tracy could successfully juggle two bridal stores in distant states, she confesses she had a more difficult time adapting to the realities of a couture bridal boutique. She didn’t like “working by appointment in a tiny space with few staff.”

“I like things to be buzzy and busy,” she says. “It became boring.”

As commercial real estate costs in Charlotte dropped amid the Great Recession, Tracy pounced on the opportunity to bring her preferred – and proven – business model to North Carolina. She moved into a 15,000-square-foot space formerly occupied by a furniture store and, as in Syracuse, packed the store with hundreds of gowns and ditched appointments entirely in favor of walk-in traffic. In the first week, she says, people were waiting outside the door.

“We had the money, time and effort devoted to figuring out the right formula and knew what to do,” says Tracy, who applied that same recipe when launching additional New York Bride & Groom units in the Southeast. In 2015, the company debuted a 20,000- square-foot store on the edge of Raleigh, N.C. Two years later, it opened a 14,000-square-foot store in Columbia, S.C.

“Add water and poof!” says Tracy, who made the tough decision to sell her Syracuse store in 2017 as well. “It was time to anchor in Charlotte and cut ties with New York.”

The company expansion wouldn’t be possible without it being a full family effort. Tracy’s daughter Krista has been a paramount part of the team since she was 13, doing everything from managing and operating the Charlotte store to now overseeing the alterations department as a self-taught seamstress. Daughter Julie joined the team in 2016 working her way through every department to develop the knowledge to now manage the Columbia store.

“I couldn’t imagine being able to run three stores without all of the family, friends and love that each store is filled with,” Tracy says.

Confident and enthusiastic, Tracy has not been afraid to cut against the grain at New York Bride & Groom. Most notably, she continues to shun appointments, something she recognizes few in the industry “can wrap their heads around.” The store’s website, in fact, celebrates this: Shop when the mood strikes, not when there is an available appointment.

“It’s all about convenience to the customer,” Tracy says.

But what about the busy Saturday? Doesn’t the store get overwhelmed, crowded and chaotic? Not really, Cory says. 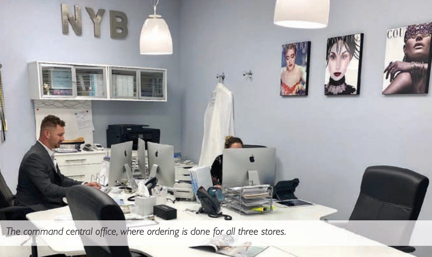 The Charlotte store routinely staffs 16 people on Saturdays. Associates greet customers at the door, gather information about their wedding, style preferences and the like, guide them to inventory and then monitor and support the customers, as necessary. Cory likens the boutique to a busy full-service restaurant. Much as a hostess, servers, food runners and bartenders hustle around filling different roles, he says New York Bride & Groom staff find “their groove and place” once the day gets moving.

“And customers feel that energy,” he says. “It’s a real communal feeling with people interacting with one another.”

In fact, Cory sees the absence of appointments as an asset, not an impediment. Customers who visit New York Bride & Groom stores from across the southeastern U.S. relish that flexibility, he says, calling the walk-in model less pressure-filled than the traditional one-on-one appointment experience so engrained in bridal retail.

“They’re shopping with us the same way they do at Macy’s, so it’s familiar and not intimidating,” he says. “They know the expectations, know who we are and do their research so there are no surprises.”

Might New York Bride & Groom lose the pomp and circumstance of the one-on-one appointment with a dedicated consultant? Perhaps, Cory says, but that’s okay, too.

“Not everybody’s money belongs in our cash register,” he concludes.

And what of the current public health situation and social-distancing measures? Surely that compelled New York Bride & Groom to offer appointments.

When the stores reopened following government-mandated shutdowns due to the novel coronavirus pandemic – the Columbia store closed for one month while the Charlotte and Raleigh stores sat dark for six and seven weeks, respectively – New York Bride & Groom leaders contemplated instituting appointments, but ultimately decided to see how things would play out. Rather organically, they found customers reduced their group sizes and were mindful of other guests. The stores’ large showrooms, meanwhile, naturally enabled guests to spread out and maintain social distance.

“We asked people to be aware and sensitive and they were,” Cory says. “It played out exactly how we hoped it would.” Besides rejecting appointments, New York Bride & Groom also cuts against the grain by allowing customers to take photos of dresses. Yet more, tags on those dresses contain a bounty of information, including style number, sizing, colors and customization options. This helps customers understand what’s available and stylists answer questions to sell gowns.

“Part of our culture is transparency and we’re not going to hide things from people,” Cory says. “By imposing rules like no photos or guarding information, you invite a potentially negative situation that can leave a sour taste in customers’ mouths. We’re not interested in that.”

Adds Tracy: “At the end of the day, it’s so much easier to be transparent and that’s been our desire from day one. We know we’re doing the right things for the customer.”

More to the ‘formula’ 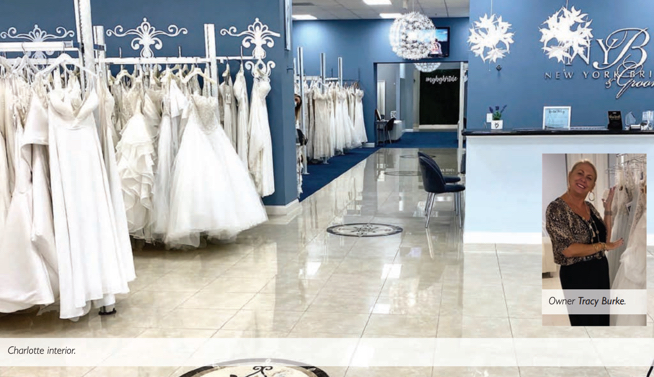 But the winning formula at New York Bride & Groom goes beyond eschewing appointments and embracing transparency. The store maintains a strategic approach to inventory while investing in its systems, its people and its future, fully aware that nothing is guaranteed.

Though New York Bride & Groom offers more than 1,000 dresses at each of its locations, gowns available for special orders as well as off-the-rack purchases, it elects to go deep with a select number of vendors – six to be exact – rather than filling its showrooms with product from a lengthy list of varied manufacturers. That slim-but-deep philosophy even held as the company expanded its plus-sized inventory into a full-fledged department, one that now includes about 125 plus-sized dresses at each store.

“Buying minimums two times a year from multiple designers is what can kill a store. If you can’t get the right looks with six prominent players in the industry, then I’d argue that you don’t have the right partners,” says Tracy, who regularly leans on staff input when it comes to purchasing. “They’re the ones with the brides at our three stores getting feedback and seeing what resonates. Their insights are critical.”

True to its name, New York Bride & Groom also offers custom suits and tuxedos, standing as one of the top national clients of Jim’s Formal Wear. All three stores showcase the menswear department with thoughtful merchandising and earnest promotion alongside the bridal goods.

“Menswear for us is front and center and its own business, not an afterthought,” Cory says. “We’ve invested in it and that investment has paid off.”

Tracy notes that the store has strengthened its internal systems and processes over the years as well, tightening up operations, marketing and sales and placing a premium on a collaborative and caring workplace culture where growth and passion thrive.

“We try to be as good to our team as we possibly can because we recognize it’s a physically, mentally and emotionally taxing job,” says Tracy, who has sent staff to Tony Robbins seminars to energize and motivate.

And, finally, New York Bride & Groom works hard to avoid falling into the comforts of the status quo. While closed during the COVID-19 pandemic, for instance, the family remodeled all three stores, taking over space previously devoted to bridesmaids – the company exited the category in 2019 – and dedicating it to bridal.

“We did over $1 million in bridesmaids but stopped because it was just so heavy with all of the extra people in the store, the staffing, shipping and receiving and so on,” Tracy says. “We spread out bridal hoping we’d sell more and it’s worked.

” Withstanding the challenges of a global pandemic and even more confident in its formula given success across 26 years and four different geographic markets, New York Bride & Groom marches ahead and continues to eye additional expansion opportunities in the Southeast.

“As long as the kids are in it and work hard, I’m committed to taking this where it goes,” Tracy says of the family-owned operation. “It’s still a fun business.”